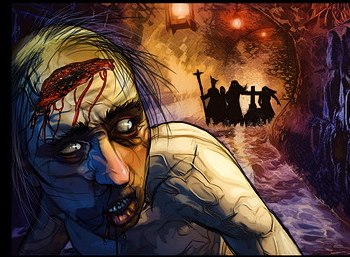 It‘s happened to anyone with an interest in the medium; standing in line or sitting in traffic, an idea snakes its way into your head and you think, ‘This would make a great comic book!’

In days past, this is where most stories would end, quickly squelched by the realization that even armed with a great concept, an individual had no easy path to produce, distribute, or fund such an undertaking without ‘breaking in’ to the field of established publishers. Recently though, with the rise of initiatives across the industry to assist creators in getting their story into the hands of interested readers, we find ourselves in an unprecedented era where anyone with enough drive and determination has the tools readily available to create and distribute their own self-published comics. But with one problem solved, the newly independent writer/artist finds themselves adrift in a sea of other questions, both in and outside of the creative process. Shawn French, a comic fan for years who is producing his first entry with the upcoming graphic novel, Escape From Jesus Island; has already encountered some of these challenges, and sat down with us to share his experience about the journey thus far in the realm of self-publishing.

Talking Comics: Why don’t we start off with a brief overview of your upcoming project, Escape From Jesus Island?

Shawn French: It’s a story about an attempt to clone Jesus to create an island resort for the ultra-rich to be healed by the son of God. They eventually succeed, but end up with hundreds of these mutated freaks before they get one right; as well as a twin brother [to Jesus], Damien. The Vatican sends in a team to extract Jesus, and all hell breaks loose.

Talking Comics: That certainly sounds like a setup for some interesting conflict. So how did this project get started?