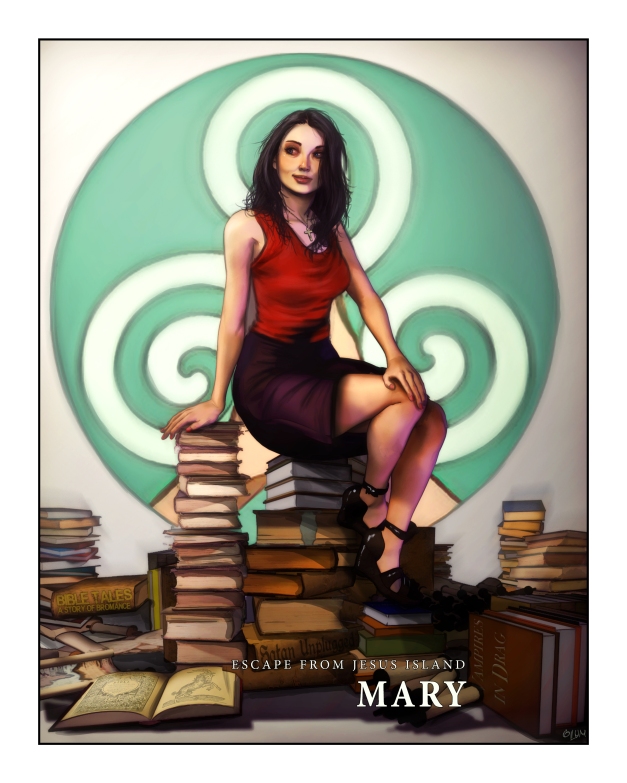 MARY: We shouldn’t have to do the religious stuff anymore. If we rescue him, I mean.

MARY: Well, we’re supposed to devote our lives to Jesus because he saved us, right? So if we save him back, we should be even. Heaven is a total lock now. We’ll probably get a backstage pass.

An idealistic young doctor and theologian, Mary was recruited by the Vatican after they read her dissertation, “Jesus 2.0: Savior or Scapegoat,” which examined how humanity was apt to respond to Christ’s return. She believed that humans were at least as likely to kill him again as to actually learn from his teachings.

Although having reservations about joining The Vatican due to the child-abuse scandal and her belief that the obscene wealth on display went against everything Jesus taught, Mary accepted their offer in hopes of effecting change from within. She quickly learned that the systemic corruption extended all the way to the top. Although Pope Sidious claimed infallibility, Mary saw little evidence to support his boasts.

Full access to the Vatican Apostolic Library was such an incredible research opportunity that it got Mary through her first two doubt-filled years in Vatican City. Most of her days were spent poring over ancient texts, far removed from the actions of the church.

A summons from Sidious changed all that. Mary learned that she had been selected for a very special mission. Russian Prime Minister Yegorov’s wife had miraculously recovered from cancer after a recent visit to a remote island research facility run by ReGen Corp. It is rumored that a clone of Christ himself healed her.

Mary was ordered to accompany an elite Vatican Black Ops squad, led by the ruthlessly loyal agent Joe, on a covert excursion to the island facility. Their mission: Secure the purest manifestation of Christ and Escape From Jesus Island.