We are a whole lot of psyched to announce that our new Escape From Jesus Island spinoff webcomic, Mutant Babies, will be available for free TOMORROW (Jan. 4) on The Entertainment Experiment. Here’s everything you need to know…

What is Mutant Babies? MB is a monthly webcomic chronicling the adventures of the mutants from Escape From Jesus Island as adorable, murderous toddlers. Under the guidance of the baby Antichrist, this crew of cuddly cannibals launches a series of increasingly ridiculous escape attempts.

The series is illustrated by Peeter Parkker, who lettered our first three issues before shifting focus to bringing Mutant Babies to life. It features original tales in the Escape From Jesus Island story world from myself (Shawn French) and has the whole crew of mutants cooked up by Mortimer Glum. And as always, editor/letterer/webmonkey/mutant-wrangler Shawn Greenleaf has the impossible task of trying to keep the misfits in the Wisdumb crew in line.

Where and when can I read Mutant Babies? The first installment will be available Jan. 4 on The Entertainment Experiment, a kickass site that features Maine-made web content. Each story will be released in three parts, with a new chunk of wrong dropping on the first Monday of each month, henceforth known as Mutant Babies Monday.

How did this insanity come to be? While preparing our first Kickstarter campaign for Escape From Jesus Island, series co-creator Mortimer Glum and I had a running joke coming up with our weirdest ideas for variant issues. A Christmas issue where Jesus and the Antichrist battle Krampus, etc. One of the favorites was a bloody parody of Muppet Babies, with pint-sized versions of the mutants from EFJI wreaking havoc in adorably homicidal ways.

We decided to leave it to fate, so we listed Mutant Babies as a stretch goal. If we passed our crowdfunding goal by more than 50%, we’d do a Mutant Babies story. We did, so now we are.

Peeter Parkker’s art style is such a perfect fit for the Mutant Babies world. Once we saw his designs for these demonic rugrats and the scripts started coming together, we expanded our original plans from a one-off to an ongoing webcomic. This is just too weird and fun and wrong to only do once.

So join us for this bizarre new adventure. All the carnage; half the height! 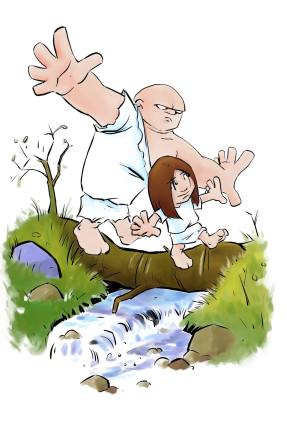 4 comments on “Mutant Babies webcomic launches on The Entertainment Experiment”