Posted by Jesus Island comics on May 10, 2013
Posted in: Spotlight. Leave a comment

Revelation 13:1 “And I stood upon the sand of the sea, and saw a beast rise up out of the sea, having seven heads and ten horns.”

Before I (Shawn) starting writing the script, I spent a year studying Jesus and Revelation. I listened to hundreds of hours of sermons from every denomination I could find. Every preacher has a different take on Revelation, and they all seem to struggle when it comes to explaining the seven-headed, ten-horned Beast of prophecy.

Because they cannot envision such a creature, they say it’s symbolic. The horns mean countries, the heads represent some other crap. Fortunately, we haveMortimer Glum to envision it for us.

The funny part is, Escape From Jesus Island is a much more literal interpretation of the prophecies in Revelation than any of the predictions I heard in a year of obsessively listening to sermons. Revelation is crazy and we pillage a lot of great material from it.

The Beast was created after Mortimer designed a badass three-headed mutant named Pariah. Peeter Parkker suggested giving it seven faces, for reasons that will emerge as the story unfolds. We then had Mortimer add horns on each elbow and knee, to bring the total to ten. The Beast was born.

He is: Pariah, Beast of the Unholy Seven 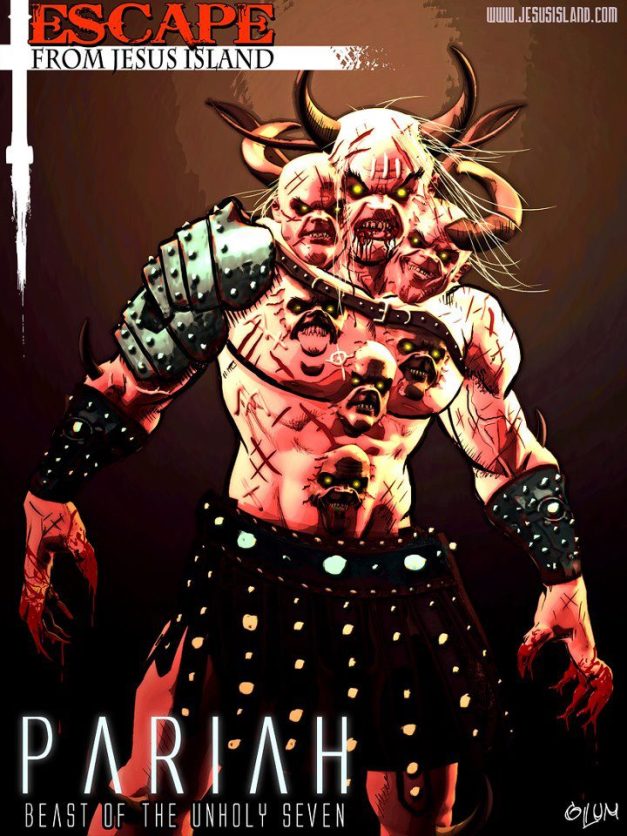